We've sent you an email with a link to update your password.

Registering for this site allows you to access your order status and history. Just fill in the fields below, and we’ll get a new account set up for you in no time. We will only ask you for information necessary to make the purchase process faster and easier.

Just added to your cart

The most important club in a golfers' bag, a putter. On average, a golfer is going to use his putter over 40% of the time during a round of golf. Selecting the right putter is imperative to a golfers' success on the golf course. There is a lot that goes into purchasing a putter, this putter guide is here to help aid you through that process, and to help show you how to buy the right putter to save you as many strokes as possible on the course.

What Putter Should I Buy?

A question on the forefront of a lot of golfers minds, there a lot of things that need to be looked at, and addressed when deciding between putters and figuring out what ultimately will be the best one to have you hitting more consistent putts on the course and improving your game.

When searching for that new putter it is important for the golfer to first analyze their own personal putting stroke, as well as personal preferences on the putter components, head shape, and type of putter.

Next, there are more technical things to look at when searching for a new putter that are imperative to a golfer. Finding the right putter length, putter shaft type, and putter head will all play a huge factor in the golfers decision in which new putter they choose.

In this guide, we will break down the different technical aspects and how to translate it to each individual person to ultimately answer the question of what putter you should buy.

There are several different types of putters and ways to classify putters into separate categories, but the most common way to distinguish putter types would be face balanced putters against toe balanced putters, with the rare exception being a counterbalance putter.

3. Counterbalance putters are the third type but are far more rare than the other two. The counterbalance has extra weight in the club that allows for a higher MOI (moment of inertia), allowing the ball to come off of the clubface at a faster speed.

Another crucial part of finding the right putter, is making sure you have the correct length of putter. A traditional putter will be anywhere from 33 to 36 inches long, while the standard length is 34 inches.

To find the correct putter length that fits you, let your arms hang free to the ground while in your stance and measure from the ground to where your wrist and hand meet. This should be the length of your putter shaft. 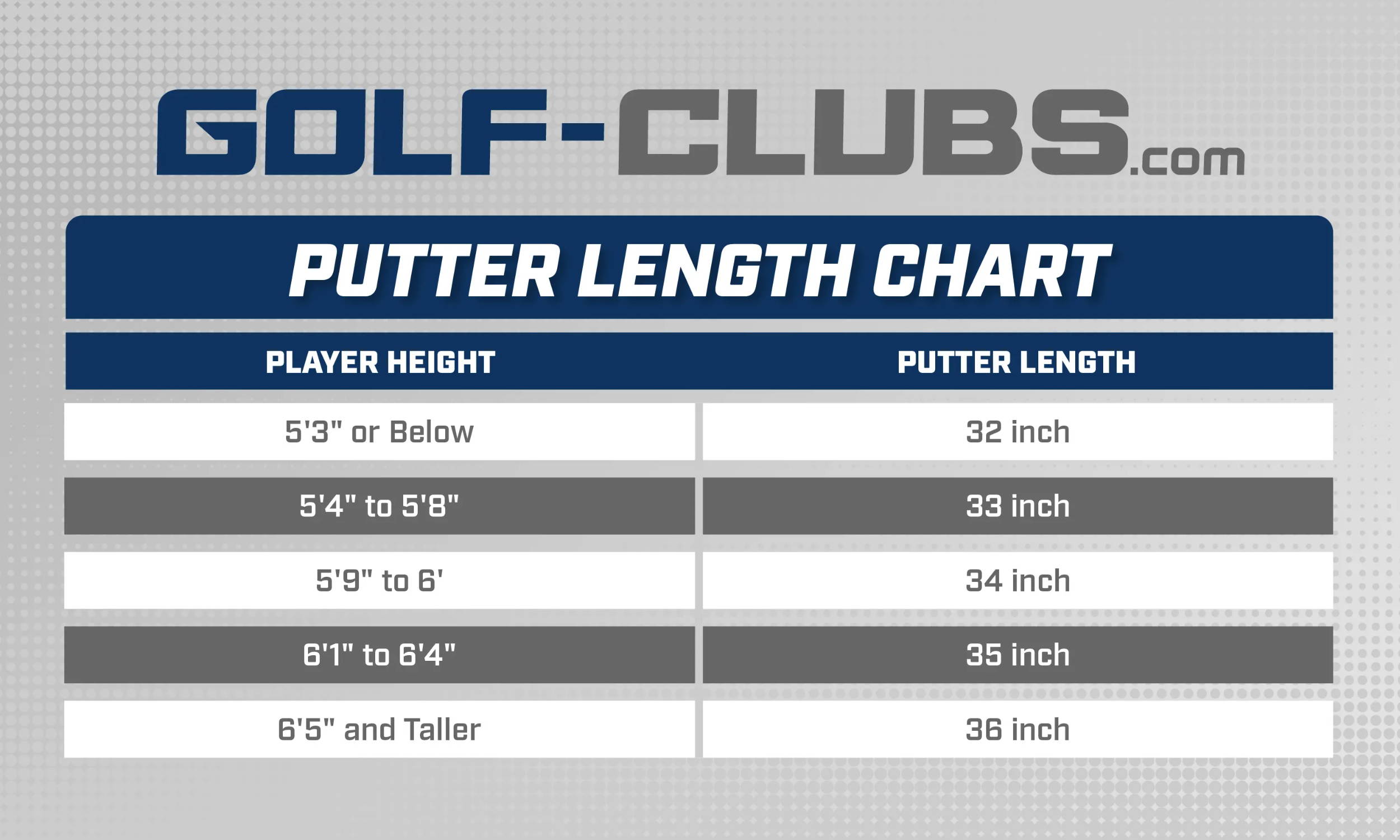 There are two types of putter heads that are most common amongst golf putters. The putter head that you choose will ultimately depend on personal preference but both give a lot of options that can improve your game.

Are known for their large head shapes that are normally shaped in a square, semi circle, or half-moon like shape. A newer putter to the market, the mallet is known for the majority of the weight in the head being away from the club face. The mallet is also known for its stability, usually leading to a straighter putting stroke.

A blade is the rival the mallet, as the blade is more known as the traditional head type. Blades dominated the putter market for a long time and are still very popular. The weight distribution usually leads to a toe hang with the putter head providing an easier way to rotate the club head through the putting stroke for those who have an arc stroke.

An insert putter face is known for the fact that it is a soft insert in the face of the head that provides a softer feel for golfers on the green. The soft insert allows a golfer to hit putts with the golf ball making little to no sound. An insert face allows more forgiveness across the clubface where the ball is hit, not relying on hitting the sweet spot.

A milled putter face is usually made out of one piece of material, most traditionally steel, and has a milled pattern forged into it. A milled face is known for having a more consistent feel, as well as the ability to be more accurate with better distance control. A milled face is not as forgiving, forcing putts to be hit off of the sweet spot for the most consistent results.

There are three types of shafts that golfers have to choose from: heel shafted, center shafted, and offset putters. A shaft is imperative to the feel golfers have and will dictate the way golfers will need to visually line up the golf ball on their putts.

The next popular type of shaft is the center shafted putter. This version of shaft is similar to the heel shaft in the way in which it is connected to the putters head, the difference being that the connection is in the middle, or center, of the club head.

The next popular type of shaft is the offset shafted putter. This version of shaft is similar to the heel shaft in the way in whiLess common, but still popular amongst many golfers, the offset putter brings a new look to alignment on the putting surface. The shaft is designed to have the putters head sit back a couple of inches behind the shaft. This will aid the g0lfer in aligning their putts along with being more visually pleasing to some.

There isn't much of a difference in regards to performance when choosing a shaft, it comes down to which look and feel the golfer is going to be more comfortable with.

Q) How much should I spend on a putter?

A) This club is going to be one of the longer lasting clubs in your bag, as well as being the most important club in your bag. Spending the money necessary to purchase the right type of putter to fit your game is something to seriously consider doing. It also may be worth getting a putter fitting done to ensure the best fit club to help you start making every putt.

Q) Are there any types of unconventional putters?

Q) Does my putting stroke affect what I should buy?

Q) What is the best putter for a high handicapper?

Q) What is the best putter for a mid handicapper?

Q) What type of grip should I have?

Ready to find your next putter?